“I was just thinking about the first time I laid eye on you, how pretty you looked.” – Mike Wazowski

I am a sucker for animated kids’ movies. Especially Disney and Pixar. Seriously, I can’t get enough of them but I’m sure my neighbors wish I had more than Disney songs in my shower-time repertoire. Mike Wazowski happens to be one of my favorite animated characters. It might sound strange, but I feel like I can really relate to that little green monster. He’s dangerously short, jokes around probably a little too much, believes a fancy birthday dinner means sushi, and has an amazing best friend. Really, who else could give chartreuse a good name?

I owe Mr. Wazowski a debt of gratitude, since he really kicked off my current fervor of amigurumi inspiration. Before re-watching Monsters Inc. I was in a bit of a creative lull. There are the usual excuses of being busy and not having time for crafts, but I also wasn’t feeling too inspired. But about a month or two ago I was partaking in a lazy Saturday since I wasn’t feeling too well, and went to the 100 yen shop (dollar store) and pharmacy to get some tea, soup, and other sick-person supplies. After a compulsory glance through the craft section, and stumbling upon the perfect shade of green yarn, I couldn’t resist making my own little Mike Wazowski. The rest of the weekend passed too quickly though and this little guy wasn’t finished for a while!

Toddler age Mike looked so cute with a bigger proportioned eye and baby teeth that I thought he would suit amigurumi best. I really wanted to make the Monsters University hat too. As always I think I got a little too excited with all the potential details, which only added to the already lengthy construction. Hand embroider felt elements for the hat and face? Yes! Add nails to his fingers and toes? Of course! Brown end of horns? Duh! Stitch knots for freckles on his cheeks? Obviously! Sometimes my perfectionism pays off though. 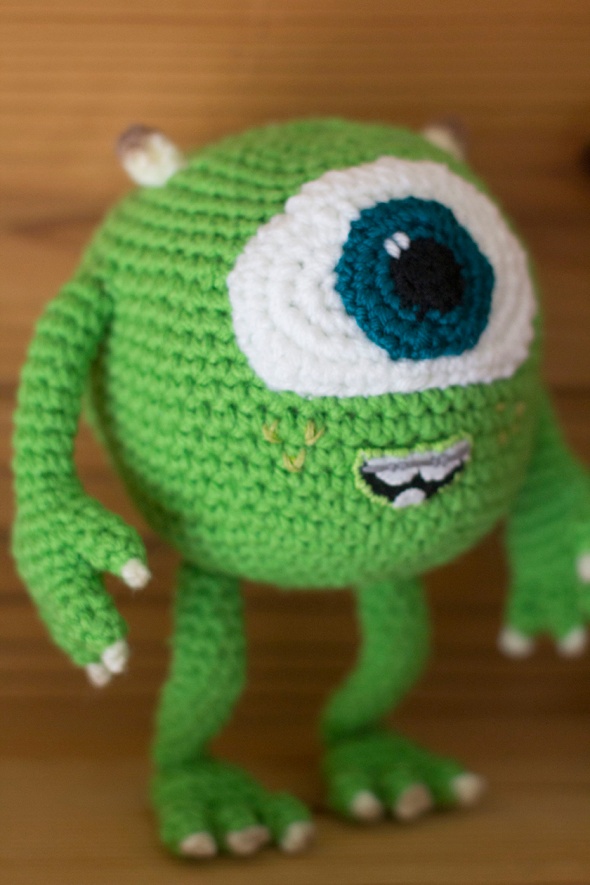 I’m pretty proud of him! He stands about 8 inches tall, with posable arms and legs, as well as an adorable removable hat. Mike is my first posable doll. I was really anxious to try out the technique when I read about it over at Nergurumi , and I couldn’t be more pleased with the results. When I found 1.2mm copper wire at the dollar store I decided to give it a try. The arms are one length of wire running through both arms and his body, plus a little extra to bend in at the ends. For his legs I doubled up on the wire so it would be a bit stronger and hopefully he could stand on his own.

Before I started on the body I crocheted the legs and arms. That way I could just attach them as I went along, instead of having to do it later. Also, arms and legs are definitely the most tedious part of making amigurumi, so I wanted to get it over with. This was also the first doll where I started the body at the bottom and worked my way up. I’m not sure I’ll make the switch to bottom-to-top doll making, but it was great for this project. That way I could add the wire and sew the legs on easily, then continue on to the rest of his body. When I only had about 5 decreasing rounds left I lightly stuffed his body, added the wire for the arms, sewed them on, and stuffed him some more.

At this point I was so stinking excited about his arms and legs that I almost lost focus. He could stand! He could sit! He could move his arms around like he just didn’t care! Fortunately, I wanted to keep going. I went back and forth a few times on whether or not to use felt for his eye or to crochet it. As you can see, I decided to crochet the eye because I was impatient to finish and the embroidery was taking a while. For his mouth I decided to use felt since it’s an irregular shape and has several small parts. After completing the decreasing rounds, sewing up his body, and sewing on his eye and mouth, all that was left was adding the horns! I’m still working on transcribing my notes, but I’ll update with a link to my pattern for Mike. So keep a look out!

After just one doll I’m totally hooked on making my future dolls posable. They take a little extra work but I certainly can’t go back now! Have you ever made a posable amigurumi doll? One day another animated-to-amigurumi venture will be Avatar Aang. He is just too freakin’ cute. Of course I’ll have to make a big Oppa too!

Like Loading...
29 Jun This entry was published on June 29, 2014 at 22:45. It’s filed under Amigurumi and tagged amigurumi, crafts, crochet, disney, doll, fuwafuwastudio, mike wazowski, monsters inc, monsters university, pixar. Bookmark the permalink. Follow any comments here with the RSS feed for this post.